A PERSHORE man who died within days of his golden wedding anniversary has inspired his grieving wife to fund-raise to help find a cure.

Rob Faulkner died two weeks after celebrating his 50th wedding anniversary with his wife Lesley, 72, just six weeks after being diagnosed with a glioblastoma multiforme (GBM).

It’s after he began to experience spells of confusion in February 2021 and suffered a fall, leading to the shocking discovery of a large mass on his brain. Rob died on April 10 last year surrounded by his family, aged 71.

Rob’s cognition became slow and after giving up driving, a fall in his family home saw him taken to Worcestershire Royal Hospital where a CT scan revealed a large mass on his brain and he was referred to neurology at Walsgrave Hospital in Coventry.

Weeks later, Rob was given the devastating news that his tumour was terminal and operating could result in paralysis or even death and he was placed on palliative care.

“Rob would get up in the middle of the night and start his morning routine of getting dressed and making a cup of tea – I would often tell him it’s not time to get up yet and persuade him to get back in bed,” Lesley said.

“The tumour went from one side of his brain to the other and looked like an octopus with tentacles. Our GP visited the house and told us that Rob’s life expectancy was six months – which was really hard to hear.”

The couple, who have two daughters and four grandchildren, met at school when they were 16 and were married in March 1971 at St John The Baptist Church in Halesowen and booked their 50th wedding anniversary blessing almost two years ago.

Despite Rob’s symptoms worsening, he and Lesley, along with 11 family members made it to Pershore Abbey to celebrate their 50 years of love.

“It was bitter-sweet because we knew the next time we would be there would be for Rob’s funeral. The carers were fantastic and helped get him dressed on the morning of the blessing and the family helped in getting him to and about the venue,” she said.

“He had moments where he could think straight but would then become confused again and he would say ‘my silly brain’ – I think he held on for the blessing – he was always determined he was going to make it to the abbey for our special day.” 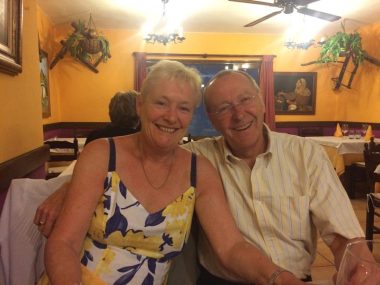 A year after his death, Lesley is now working with the charity Brain Tumour Research to help raise funds and drive awareness towards the need for more funded research to find better treatments for brain tumour patients and their families.

With the support of Pershore’s Mayor, Coun Julian Palfrey, Lesley is hosting a coffee morning between 10am and midday at Pershore Town Hall on April 30 with further activities including a garden party being planned for July.

“I know grief is a journey and it takes a long time to come to terms with a death. For this reason I endeavour to keep myself busy,” she said.

“I have become involved in a number of areas in this wonderful Pershore community. My thanks to my fantastic family and friends including neighbours for their caring, thoughtfulness, love and hugs.

“Rob would tell me ‘life must go on Lel go on live it’ God bless him.”

Hugh Adams, head of stakeholder relations at Brain Tumour Research, said: “We wish Lesley luck in her upcoming fund-raising events and are grateful she is helping to raise awareness of this horrific disease.”