Remenbrance and reflection as Pershore marks 40 years since Falklands War

PERSHORE paid its respects to those who fought and fell during the Falklands War as the 40th anniversary of the end of the conflict was commemorated.

A short service of remembrance was held in Pershore Abbey on Tuesday (June 14) led by Canon Claire Lording with members of the Pershore and District branches of the Royal British Legion and Royal Naval Association.

At the beginning of the service, a wreath was laid on the war memorial by naval veteran Roger Sainsbury. 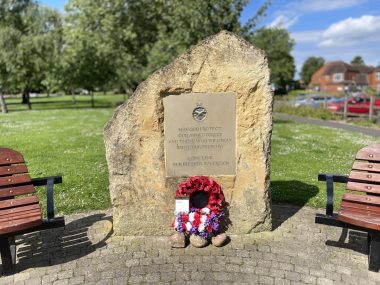 Elsewhere in the town, wreaths were laid on the Cross of Sacrifice in Pershore Cemetery and at Pershore Commemorative Garden.

A poignant tribute has been created at St Andrew’s with the Weeping Window of Poppies which will remain on display until Armed Forces Day next Saturday (June 25).

Speaking after the service, Canon Lording said: “I found this simple commemoration deeply moving, more so as a wreath was laid by a veteran who was on active service during the conflict.

“It was a day of both remembrance and reflection as we pause to contemplate the suffering of so many due to political aggression.

“We remember in our prayers all those living with both mental and physical scars of war and the families of those who lost their lives thousands of miles from their loved ones.”