Today thousands of voters across the Vale of Evesham headed to the polls to vote in the General Election 2017.

Follow our LIVE coverage throughout the night as we find out who will win the race to become Mid Worcestershire’s next MP.

Our reporter Joshua Godfrey will bring you all the latest news and the all important result.

View our SPECIAL REPORT rounding up all the reaction and results from Mid-Worcestershire here.

Conservative Harriett Baldwin has been re-elected as MP for West Worcestershire. 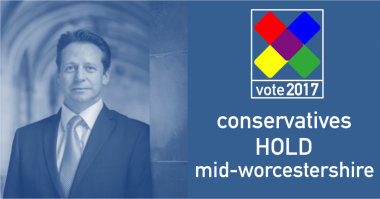 Correction: Turnout in Mid Worcestershire was 73 per cent. That’s up two percent compared to 2015.

Official turnout in Mid-Worcestershire is 71 per cent. That’s down 0.5 per cent compared to 2015.

The verification of votes at Pershore Leisure Centre is almost complete. Once that’s done counting of the votes will then begin. We should expect to find out the result sometime between 2am – 4am.

Wychavon District Council, who are responsible for the count, have said the voter turnout figure for Mid Worcestershire maybe known within the next hour.

Just spoken to Conservative candidate Nigel Huddleston about the shock exit poll. I won’t use the word he used to describe it, but it’s clear he doesn’t believe it.

The first ballot boxes have begun to arrive at Pershore Leisure Centre.

Who will win the race to become Evesham’s MP? Polls closed at 10pm and the votes cast will be transported to Pershore Leisure Centre where they will be verified and counted. We should expect a result in the early hours of Friday morning.

Will Nigel Huddleston hold the seat for the Conservatives? Or will he face a challenge from Labour’s Fred Grindrod? The Liberal Democrats will be hoping to improve on the poor performance two years ago. The Greens too will be looking to continue to increase their vote share.

What will be interesting to see is what will happen to UKIP. David Greenwood is the party’s candidate for Mid Worcestershire this time round. In 2015 UKIP finished second, will Nigel Huddleston soak up the UKIP vote following last year’s referendum decision to leave the EU? We will find out in a couple of hours time.

An exit poll has predicted a hung parliament with the Conservatives as the largest party.