8.46pm – So there we have it, no changes at all in Evesham and Pershore, while there will be new faces at County Hall the parties who held the seats at the start of the campaign are those who will take their seats for the first meeting of the new council.

I’m off to blog the Worcester results https://worcesterobserver.co.uk/news/live-county-council-seats-across-worcester-revealed/

I hope you can join me there, if not then thanks for reading and be sure to come back for all the reaction on a dramatic day. Thanks!

Coun Adrian Hardman completes a clean sweep for the Tories who have retained all of the seats they held across Evesham and Pershore.

8.44pm – Apologies folks, bedtime duties with my little un. We have the final result from Bredon…

Coun Laura Gretton retains the seat for the Conservatives. Sarah Cohen secures second place with an increase in the party’s share of the vote compared to 2017

Coun Peter Griffiths retains the seat for the Conservatives with almost 500 more votes than in 2017 when John Smith retained the seat. It’s as you were in terms of the parties in Evesham and Pershore still

5.39pm – Labour will not be wiped out in Worcestershire as Coun Luke Mallett retains his Bromsgrove West seat with an impressive 62 per cent of the vote.

Counting has also begun in Harvington where Laura Gretton will bid to retain the seat for the Conservatives against Labour’s Andrew Bevan and the Green Party’s Sarah Cohen.

BREAKING: The Conservatives will run Worcestershire County Council for another four years after winning reaching the 29 seats needed for a majority with 22 seats still left to declare.

4.58pm – The Tories finally retain a seat in Malvern which has so far repelled this blue wave sweeping Worcestershire meaning the party needs ONE more seat for a majority at County Hall.

4.13pm – The remaining ballots across Wychavon are now being verified. Thoughts as we hit halfway are the Tories are on course for an overwhelming majority, Labour has already lost double the seats it lost in 2017 and with four key defences still ahead in Worcester there must now be fears the party may be wiped off the Worcestershire map.

What do you think? Do let me know

3.47pm –  Still results to come but this is looking like the bleakest day after a long and trying night for the Labour Party. We’re just about halfway through the results across the county and the Tories already have 24 seats, a reminder you need 29 for a majority. 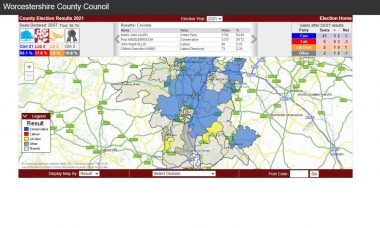 3.33pm – County-wide the Conservatives have won 21 of the 25 seats so far declared, an overall gain of two seats so far. They are just eight short of a majority with 32 seats still to declare.

Labour have lost two seats in Redditch to continue an awful 36 hours for the party locally after the Tories swept the board at last night’s Borough Council elections.

3.28pm – So two more HOLDS as Coun Dan Boatright and Coun Alastair Adams retain Pershore and the Littletons respectively for the Liberal Democrats and the Conservatives.

2.22pm – Counting now underway for Pershore. Can Dan Boatright retain the seat for the Liberal Democrats which was held by Liz Tucker for a number of years. Tim Haines (Independent) Micheal Hodges (Conservative) and Harrison Rone-Clarke (Labour) are bidding to secure the town’s sole county seat.

1.22pm – Couple of you have asked why we are covering the count remotely, well we’re aiming to be as Covid-safe as possible. I’m missing the hustle and bustle of the count though..

Any questions, do get in touch editor@eveshamobserver.co.uk or our social media pages @EveshamObserver or www.facebook.com/EveshamObs

1.10pm – Very early days with just nine of the 57 areas in and most results have come from Conservative held seats but Labour’s share of the vote in the county is currently 10.5 per cent. The Tories have lost two seats but have 49 per cent of the vote as we speak. Again, very early days…

1.00pm – I’m back, nothing to report in our area. More drama over those Hills though as the Conservatives lose their Croome seat to the Green Party as Coun Martin Allen wins. For some context the Green Party finished sixth in the 2017 poll for the seat with less than 150 votes…

12.29pm – Bit of drama from further afield in the county. Cabinet member Lucy Hodgson has lost her Malvern Chase seat as the Liberal Democrats Coun Jack Satterthwaite wins it from the Tories.

With that I am just going to run the hoover round. Back shortly!

12.16pm – Bit of a lull, so much so that as I am working from home I’ve popped the dishwasher on and the washing machine! Remember you can follow us @EveshamObserver on Twitter or www.facebook.com/EveshamObs

11.59am  – Some more observations about that early result in Evesham South, Labour – second in 2017 – didn’t field a candidate this time. Bob Rhodes took the Green Party from fourth to second with an increase of more than 600 votes compared to four years ago while Matt Snape finishes fourth for the Reform Party after a campaign in the headlines.

11.41am – So a dramatic campaign comes to an end in Evesham South. The seat which saw one candidate chosen by his party locally before being dumped, his replacement standing down in a row over the Port Street revamp and numerous accusations of bad behaviour sees the Conservatives HOLD the seat.

Coun Emma Stokes is the new county councillor for Evesham South, adding to her seat on Wychavon District Council and the Tories are on the board.

11.39am – I was going to do more facts and figures but we have a result to share….in Evesham South….

11.29 – Morning all! Welcome to our live blog of the Worcestershire County Council election results for Evesham and Pershore as they come in. Counting began around 45 minutes in Wychavon and results will be coming in throughout the day. Do feel free to keep me company with your thoughts, e-mail editor@eveshamobserver.co.uk

COUNTING has begun for Worcestershire County Council seats across Evesham and Pershore. Stay with us throughout today for regular updates and the results as they come in.

Tribute to a legend of the track