PERSHORE will play host to the Queen’s Baton Relay this summer less than a week before the 2022 Commonwealth Games kicks off in Birmingham.

Wychavon will officially welcome the baton on the afternoon of Friday, July 22 where the relay will travel through the heart of Broadway, before arriving at Broadway Tower for a community celebration.

It will then make its way through Bridge Street and High Street in Pershore, before heading off towards Upton-upon-Severn and then Worcester by teatime. 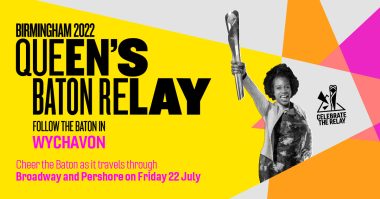 A busy schedule of activities and events are planned for the Queen’s Baton Relay, with opportunities to highlight untold stories from inspiring baton bearers who are striving for change in their community.

Among them is Pershore College coach Kevin Redmond, 52, who has been selected in recognition of supporting people with disabilities to play and engage with sport.

He coaches as part of the Leamington FC Academy of Sporting Excellence at Moreton Morrell College and Pershore College, while also teaching on the Level 3 Sport course.

As part of his work with Leamington FC, he additionally supports the club as its lead disability coach and runs training sessions for children of all ages at Aylesford School.

“I’ve never done any of my coaching or teaching for accolades, I just wanted to make a difference. To be named as one of 14 Hometown Heroes was incredible and becoming a baton bearer is a great honour,” said Kevin.

After arriving back in England on July 4, the baton will begin the final leg of its global journey in the West Midlands on July 18.

Just six days later, the baton will reach the finish line at the opening ceremony for the 2022 games.

Coun Rob Adams, executive board member for Stronger Communities, Culture and Sport on Wychavon District Council, said: “I encourage people to come out to line the streets, as they did for the Olympic Torch in 2012, and get involved in the excitement and show their support for the baton and the baton bearers.”

The relay began at Buckingham Palace in October, when The Queen placed her message to the Commonwealth into the baton and passed it to four-time Paralympic gold medallist Kadeena Cox, who became the first of thousands of baton bearers.

Since then it has visited Commonwealth nations and territories in Europe, Africa and Oceania. It still has further destinations to visit in the Caribbean, the Americas, and more countries in Europe.

“The 2022 Queen’s Baton Relay is coming home. It’s fantastic it will be visiting so many parts of Worcestershire

“The relay marks the final countdown to the biggest sporting event to be held in the UK since London 2012 and I hope people come together and line their streets to celebrate this historic moment.”

Urgent hunt for a sponsor to meet the £1,200 cost of the first round of Evesham’s legendary Asparagus