VISITORS will flock to the heart of Evesham for England’s largest 13th century re-enactment with thousands expected to mark the historic Battle of Evesham.

After a staggering 17,000 flocked to the town before the pandemic for the 2019 event, organisers hope this weekend’s event will pull some 25,000 visitors from across the country and further afield.

Spread over Saturday and Sunday (August 6 and 7) from 10am to 5pm both days, the free event remembers the bloody battle fought on August 4, 1265 between Prince Edward and Simon de Montfort.

More than 4,000 soldiers were killed on Evesham’s streets and in the surrounding countryside during a conflict over the power of the king and the way he exercised it. 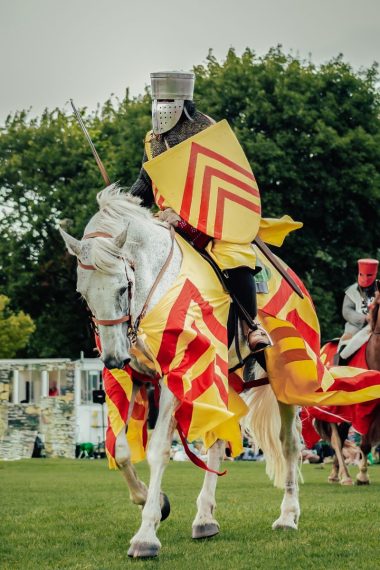 Events on both Crown and Corporation Meadow will take visitors back some 757 years with re-enactments groups from all over the country offering various demonstrations of medieval living.

The medieval festival and camp will offer demonstrations of cookery, weapons and medicine, plus the main battle re-enactment with hundreds fighting ‘to the death’ on both days.

The Battle of Evesham Grand Parade, with mounted knights in full armor and a mass gathering of medieval characters will wind its way through the town the Saturday (August 6).

Alongside them Mayor of Evesham Coun Mark Goodge will lead 32 Mayors and Mayoresses, all in their chains of office, through the streets of Evesham.

The procession will leave St Laurence’s Churchyard on Vine St at 10.15am go down Bridge Street and turn into Abbey Park for a commemoration service to remember the 5,000 men who died fighting to keep the rules of the Magna Carta

On Crown Meadow, visitors can watch medieval musicians and dancing at the camp, along with craftsmen demonstrations and medieval cookery and the chance to see a mini Trebuchet in action.

In addition there will be falconry and equestrian displays, treasure trails and children’s activities.

Battle of Evesham director Mick Hurst said: “After another year of organising the Battle of Evesham, we are thrilled to be able to put on another huge festival – almost twice the size of last year’s.

“500 re-enactors, 30 knights on war-horses and 140 trade stalls are coming along to provide a full weekend of medieval mayhem, education and entertainment.

“The Battle of Evesham is now the largest post-Hastings battle re-enactment of the High Medieval period and is attracting visitors from around the UK, Europe and the USA.

“It will also be the greatest gathering of medieval knights on war-horses seen at any re-enactment this year,” he added.

• Visit www.battleofevesham.co.uk for a full programme.