A BOLD bid to revive a Pershore shopping arcade and homes unoccupied since the 1970s has been unveiled.

But those who wish to breathe new life into one of the town’s hidden Grade II treasures have been warned it will come at a cost with an asking price of £1million.

Situated in the heart of the High Street, almost opposite the Town Hall, the unloved site has lain empty since the 1970s. 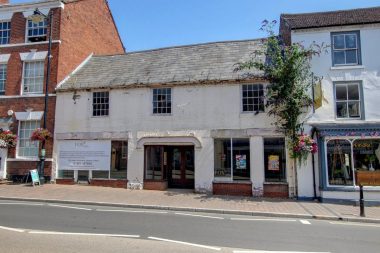 In a bid to revive the development which time forgot, agents Fox Town and Country Homes have offered aspiring purchasers a glimpse into the site.

The staggering size of the development offers space for five shops and four self-contained one-bedroom flats and is being hailed as ‘an amazing development opportunity’.

Much of the site is in the condition it was left half a century ago with traditional and original beams and beautiful bay windows befitting the time.

And a further third of an acre to the rear of the premises offers further development possibilities, subject to planning permission.

“Having not been occupied or marketed for more then 50 years, this provides fantastic scope for the developer amongst us or entrepreneur that is wanting to bring an old building back to life,” the agents said.

“This arcade is whittled with characterful beams, bay shop windows and bright and airy spaces.

Situated in the heart of the High Street, the site is within easy reach of the likes of Boots and Pershore Number 8 Community Arts Centre and remains connected to drains, water and electricity.

Since being listed in August 1972, the property has largely remained empty and news it was on the market has been greeted with glee by town residents.

Posting on the agents Facebook page one resident called for the site to be ‘put out of its misery’.

Another comment was more direct and said: “…at last….absolute disgraceful to be empty all these years….”

Counterfeit tobacco and cigarettes worth £80,000 seized in Evesham raid