After a night of high drama in London, former England captain Beckham – who was in the stands – joined the celebrities saluting the team’s achievement.

He wrote on Instagram: “Big night tonight and proud to have been stood there watching Gareth and the boys make history… Hard fight to the end, but wow was it worth it.. well done boys & well done to the incredible fans in the stadium and around the country what a night…”

Adele shared a video of her wild celebrations at home sparked by Kane scoring the rebound from a penalty.

The chart-topping singer let out a shriek when the goalkeeper stopped the Spurs forward’s initial kick but jumped around the room when he converted the follow-up.

Lipa shared pictures on Instagram from her watch party – including a plate of digestive biscuits and red crosses painted on her cheeks – and said: “IT’S COMING HOME.”

Former Good Morning Britain host Piers Morgan shared an image of himself celebrating inside Wembley alongside the caption: “BOOOOOOOOM!!!!!!”

Mel C said: “Waaaaaahooooooo! Come on England!!! What a game. So proud of those boys!”

Sarah, Duchess of York praised the Danes following the game and wished their attacking midfielder Christian Eriksen well with his recovery after he collapsed during a game earlier in the tournament.

She tweeted: “Thank you Denmark for showing wonderful sportsmanship and humility.

“@ChrisEriksen8, we wish you a speedy recovery…”

The Apprentice’s Lord Sugar said the result was “brilliant”.

Spandau Ballet star Martin Kemp shared a video of himself cheering at home after the final whistle.

Alongside the clip, he wrote: “Go on England…what a game!

On Twitter the players reacted to their semi-final success as follows:

Harry Kane – WE ARE IN THE FINAL!!! Brilliant by the boys showing fantastic character from 1-0 down. You fans were incredible singing the whole game Bring on Sunday

Kieran Trippier – What a night!!! I never knew Wembley could sound like that. We are in the final!!! Thank you everyone for cheering us on tonight, one more big push. #euro2020 #england@england

Jordan Henderson – Not much else to say about this group!! We kept fighting till the end. One more game to go!

Declan Rice – Proud to be apart of this team. One more push. We will give it everything

Mason Mount – Put your hands up if you had a good night … see you Sunday!

Harry Maguire – Stuff dreams are made of. One more game to go

Jadon Sancho – Proud of this team, History made! Finals here we come! @England

Tyrone Mings – This group is special & I’m proud to be a part of it. Unbelievable performance tonight by every single one of them. #euro2020 FINAL

Luke Shaw – Proud to be part of this team. One final push! See you all Sunday @England

Jack Grealish – I love this team!! What a night at Wembley! #EURO2020 final 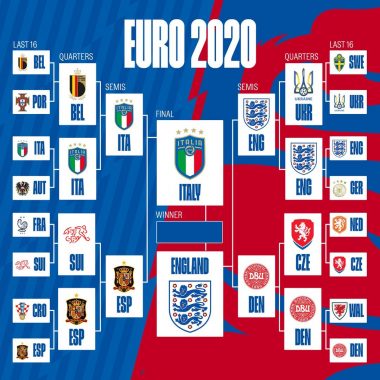 Image with courtesy from England FA