The Queen was honoured with a standing ovation as her Platinum Jubilee celebrations kicked off yesterday with a star-studded equestrian extravaganza featuring some of the world’s leading performers.

Hollywood actors Tom Cruise and Dame Helen Mirren, once again playing a queen of England, led the cast of entertainers who appeared in the first major event marking the Queen’s 70-year reign.

The audience rose to their feet applauding and cheering when the monarch arrived at the arena close to Windsor Castle for the musical and theatrical romp across the centuries called A Gallop Through History. 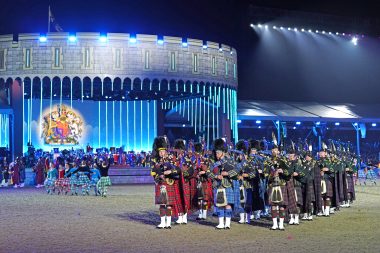 The event was staged by the Royal Windsor Horse Show which has been welcoming spectators for the past three days including the monarch who spent part of her Friday touring the show grounds after earlier missing the State Opening of Parliament.

The Queen clearly enjoyed the show and at its finale, when her own horses and ponies were led around the open-air arena, appeared enthralled, beaming as the animals passed the royal box.

Omid Djalili, who acted as the narrator for the event, could not resist a joke and said to the monarch:

“Thank you for choosing us over the State Opening of Parliament.”

Dame Mirren gave a heartfelt tribute to the Queen, telling the head of state:

“For all these years you have carried our nation. You have been at its heart, its drumbeat. You have given us purpose and when situations have been challenging your hope, guidance and leadership have been unswerving.

“I address you on behalf of all your loyal subjects. We commend and admire the way that you carry out the affairs of state with such dexterity and poise.

“I therefore speak on behalf of a grateful nation and commonwealth when I give you our sincere and most loving thanks.” 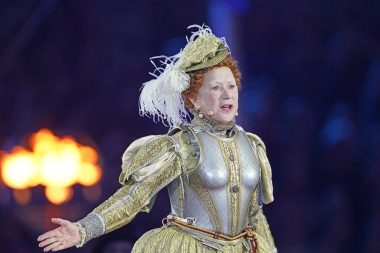 Despite ongoing mobility issues the Queen had walked to her seat in the royal box after she was driven into the Castle Arena escorted by mounted divisions of the Household Cavalry.

She was joined by the Earl and Countess of Wessex for the show that reflected her life-long passion for horses.

A tri-service guard of honour featuring the Coldstream Guards, RAF Regiment and Royal Navy was in place for the Queen’s arrival which was signalled by the National Anthem being played by military musicians.

Among the celebrities taking part in the show were Damian Lewis and Katherine Jenkins, an all-star cast of British and international talent for Sunday’s performance which was broadcast live by ITV. 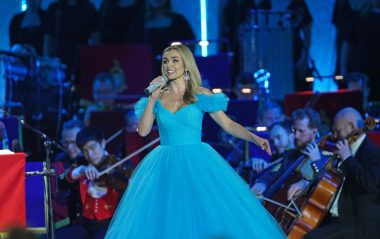 Ahead of the event Cruise was asked by the PA news agency if he was looking forward to the show, where he is expected to announce an element of the performance, and he replied “absolutely”.

“What she has accomplished is historic. She has met presidents, world leaders, people from all walks of life.

“Not just Americans, but the world knows the dignity, devotion and kindness, that is what I have always felt about her.

“Someone that understands her position and has held it through a history that’s just been extraordinary the past 70 years.” 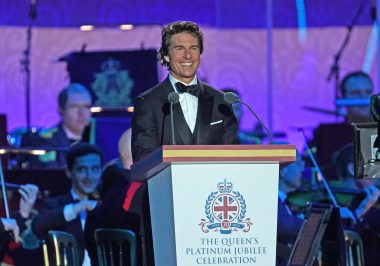 The Queen sat in the royal box with a blanket over her knees and a shawl around her shoulders as Djalili, the herald and narrator of the romp through history, took the audience through key moments, adding his inimitable humour.

Dame Helen, who won an Oscar for her portrayal of the Queen in the film of the same name, played Queen Elizabeth I as the show began by chronicling the events of the first Elizabethan age, from the attempted invasion of the Spanish Armada to leading figures of the day like William Shakespeare.

Highlights included the Royal Cavalry of Oman who filled the arena with their display of horsemanship, which had the Queen smiling, including the sight of horses lying down on command, and the precision marching and rifle handling skills of the King’s Guard of Norway.

Performers from Azerbaijan had the crowds cheering when riders performed feats as their horses galloped, from lying on the backs to doing handstands.

At one point the Queen was spotted picking up her handbag and she reached inside for her lipstick and applied a new coat to her lips.

Cruise introduced what he said was “one of the most enthralling, thrilling, heart-in-mouth displays” as he announced a performance by The King’s Troop Royal Horse Artillery.

“It takes huge courage and discipline to do what they do, galloping with guns that were fired in the battles of the First World War, weighing one-and-a-half tonnes, with no brakes.

“The drive demonstrates absolute trust between horse and rider.”

The crowd clapped in time to the music as an orchestra played and the horses galloped around the arena pulling the historic guns.

At the show’s conclusion, the Queen made a lap of honour in her vehicle waving to the cheering spectators as she passed.

Strawberry Moon: what is it, when can you see it and what could it mean?

Obesity levels linked to kids’ type 2 diabetes: How to feed your family healthily for less