Out now on Atlantic Records

IT’s been six years since The Staves – sisters Emily, Jessica and Camilla Staveley-Taylor from Watford – released their last album.

And, on the evidence of ‘Good Woman’, they are back with a bang, ready to establish themselves in the upper echelons of popular music and critical success.

The indie folk trio have not exactly been taking a break, though, in between this new release and the previous LP, the highly acclaimed ‘If I Was’.

Such is the high demand from contemporaries for their soothing and harmonious vocal performances, The Staves have laid down tracks for an illustrious list of artists that name-checks Lucy Rose, Bon Iver and Flyte. Most recently, they augmented the sound of Paul Weller’s No.1 LP ‘On Sunset’.

‘Good Woman’ then, finds the three with yet more musical experience under their belts – and that confidence is clearly captured on the LP.

The trio are more direct with their lyrics too, perhaps as a result of the writing and recording being borne out of a time of severe personal turmoil, a time where relationships ended, their beloved mother passed away and Emily gave birth to her first child. 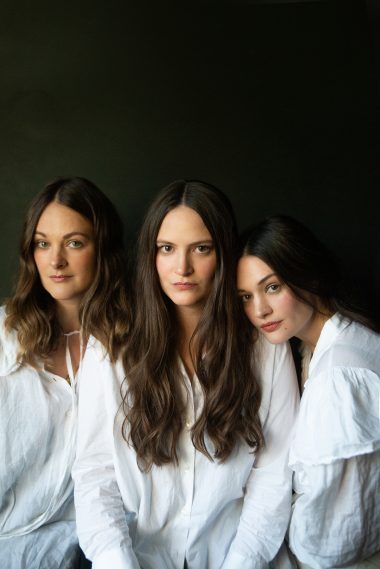 The Staves’ ‘Good Woman’ LP is out now. Picture by Sequoia Ziff.

‘Careful Kid’ could be a lesson told to their younger selves, while the title track finds them seeking strength and reassurance of their place in the world, wondering “who will build statues of me, when I leave you all behind?”, likely in acknowledgment to a self-imposed human pressure to create a lasting legacy.

‘Best Friend’ carries through a strong start to the album while the calming ‘Nothing’s Gonna Happen’ is peaceful breakwater in the middle of the LP. The latter would not be out of place on a Fleetwood Mac record, such is the calibre of songwriting on the album.

‘Good Woman’ is a mainly self-produced success, with just enough help from John Congleton, whose production adds authority to the recordings, embellishing the tracks with some subtle electronics and, at times, Bonham-esque drum sounds (‘Careful Kid’).

The ‘ooh / ah’ vocal harmonies are smartly used as a sort of Mellotron pad in ‘Good Woman’ itself, one that would be an in-demand patch for digital music creators.

With tracks titled ‘Failure’, ‘Trying’ and ‘Paralysed’ it’s clear the trio’s recent personal experiences and the effects they had on them are being laid bear for all to hear, as hearts are worn on their blouse sleeves.

The album is rightly proclaimed as a testament to the band’s strength and that of all women, their sisters, mothers and daughters, just trying to be a good woman.

Listen to the album on Spotify here https://open.spotify.com/album/66A7X1EqFQEEvuE5Nezqrl

Vet astounded after saving puppy that swallowed a face mask

‘Was there life on mars?’ UK scientists play key part in NASA mission to Red Planet