Being funny is what’s made Brummie born Sir Lenny Henry’s fame and fortune. But when he was a child, his wit served what was at the time an even more valuable purpose – it stopped the bullies that plagued him.

The young Henry realised that making the bullies at his school laugh stopped them attacking him, so he used his wit as a crafty defence. And now the comedian has included bullying in his new children’s book, The Boy With Wings, in which the hero is targeted by school bullies – but realises saving the world is a bigger priority than his waste-of-space tormentors.

“I was bullied at school – mainly because of racism. At one point in my school career I was bullied every day and it went on for ages,” Henry remembers. “But I discovered if you make jokes about the bully and being bullied, you might get people to be on your side.

“It absolutely happened. This one boy kept pushing me around for days and days on end, and eventually I said something like, ‘You must really fancy me or something because we’re always rolling around on the floor in the playground,’ and my mates laughed. Then I said something else about maybe we should have dinner and a movie first, and they laughed again, and I thought ‘Wow, this is great!’

“Jokes are like a sword and a shield, you can defend yourself with them.”

In Henry’s book, which is aimed at children from the age of about nine years, the hero, Tunde, sprouts wings and learns he’s all that stands between earth and total destruction. Lenny says:

“Tunde, who’s bullied because he’s black and he has a beaky nose, makes jokes.

“But he’s good at sport and he can run, and he’s got friends who back him. If you can, you need to be able to communicate and make friends, because that makes a big difference – I did that through humour.”

As well as shining an unfavourable light on bullying in the book, Henry strongly believed his central character should be black, because although he was a voracious reader himself as a child, none of the characters in the books he read looked like him. Lenny recalls:

“I grew up reading things like Just William, the Famous Five, the Secret Seven and Jennings and although I enjoyed those stories and I could put myself in them in my imagination, there was never anybody that looked like me in them – there were never any Afro-Caribbean British kids in them, so it was always a bit of a reach for me to be in a Jennings story or a Tom’s Midnight Garden story. I would’ve loved to have seen a character like me in them. I was very aware, although I didn’t really care at the time, that there wasn’t anybody like me in those stories.

“So cut to me with my daughter, reading all these stories to her almost every bedtime, and realising that even in the Nineties there weren’t very many stories with black kids in them. So when this opportunity came, I just decided there was going to be a black protagonist and he was going to have friends of colour, and someone was going to be in a wheelchair – it was going to be an inclusive story, so kids could go ‘Wow, I’m in this!’”.

Henry “loved” writing the book, which took him about a year, and says it “just poured out of me. There’s more stories where that came from – I love the process.”

But how did this famous 63-year-old comedian, who co-founded Comic Relief and is now also an accomplished actor – he’s spent much of the last two years filming Lord of the Rings in New Zealand, and is currently filming the prequel to The Witcher – know what kids more than 50 years younger than him want to read?

“I didn’t know that kids would be able to relate to what I was writing, but I did think about what I liked when I was nine to 12 – Spiderman, the Fantastic Four, Billy the Cat, the Mighty Thor, The Avengers,” he says. His book even has a comic strip at the end, drawn by the renowned Marvel and DC comics artist Mark Buckingham, because, like many of the kids of his generation, Henry also loved reading adventure comics.

“I liked Marvel comics and DC comics, and stuff about superheroes, magic, fantasy, and a bit of sci-fi,” recalls Henry. “Anybody who knows me who reads my first book will realise of course Lenny was going to write that.”

Like many children’s books, the Boy with Wings subtly carries a handful of important life lessons that children would do well to absorb, including that bullying is wrong and it’s important to be kind. But Henry certainly didn’t want to ram any moral codes down kids’ throats, stressing that escapism and adventure are the important things about his book.

“You have to try and grip the kid as quickly as possible with the story, and if there are any messages in there like ‘be kind to people’ and ‘don’t bully people’, it should be submerged – you don’t want to be doing that in the middle of an adventure story,” he stresses.

“You don’t want to be saying ’Don’t forget to wash your hands kids!’ in the midst of an adventure – kids just want to know what happens next, although hopefully at the end they’d say ‘Hey, you said that thing about washing your hands…”.

Henry has already started penning his second children’s book, after getting a “fantastic” early reaction to The Boy with Wings and its“adventuresomeness”.

So will the hero in his next book be a black child too?

“That’s a good question, no-one’s ever asked me that before – they never asked Charles Dickens or Stephen King whether their heroes were black or white, did they?” he says, wryly. “I suppose black authors are compelled to continually explain themselves about who or what they choose to write about.

“But the books are for everybody, not just for black kids – they’re for all kids.”

The Boy With Wings by Lenny Henry is published by Macmillan, priced £12.99. Available now. 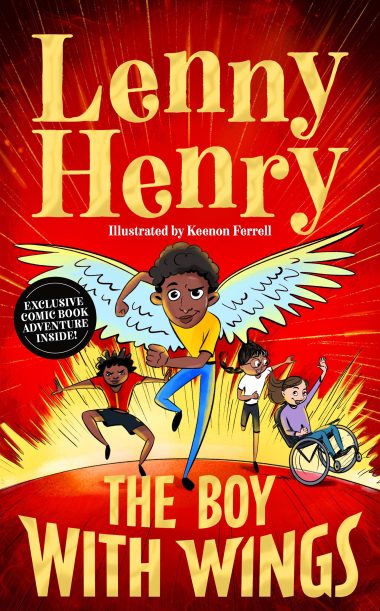 New rules to drive down cost of school uniform for families

Lobsters, octopus and crabs to be recognised as sentient beings